DNA analysis of predisposition to drugs. Get closer to preventive medicine. More info
;

PACK ALL IN ONE 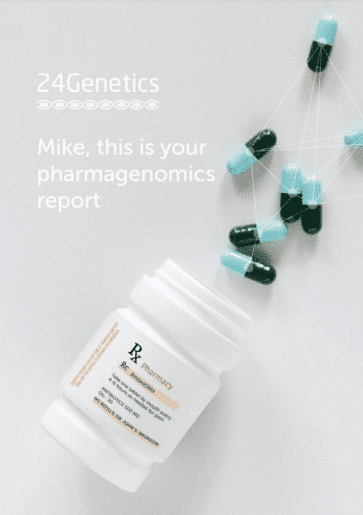 Find out your genetic predisposition to drugs with a DNA test!

We have always observed how some drugs have the desired effect on some people but not on others. There can be many causes for these differences, and pharmacogenetics is undoubtedly one of the most important factors.

Our pharmacogenetics DNA analysis analyses a list of medicines. We rely on recognised scientific studies to which we apply your genetic data. By matching your genetic data with these studies, our algorithms show us your predisposition to these drugs.

Pharmacogenetics and pharmacogenomics: are they the same?

Pharmacogenetics and pharmacogenomics are words that are often used synonymously but have some differences. Pharmacogenetics is the biological discipline that studies the genetics of an individual’s response to drugs, while pharmacogenomics studies variation in the expression of disease-relevant genes and variable responses to certain drugs in order to develop new treatment pathways.

How can a Pharma DNA test help me?

Currently, adverse drug reactions lead to significant morbidity and mortality in patients, often resulting in increased healthcare costs. Although drug compatibility has been known and studied for many decades and any package leaflet specifies the incompatibility of a drug with many others, genetics also has much to contribute. The assumption that patients are a homogeneous group of individuals and that medicines and treatments that are usually effective in one group of individuals will be effective in the rest is almost certainly wrong. Clinical experience shows that medicines that work very well in some patients have many side effects, are ineffective or cause adverse, even fatal, consequences in others.

The lack of efficacy in treatments such as those for Alzheimer’s disease, schizophrenia or hypertension is very high. Variations in drug response may be due to exogenous factors—for example, diet, consumption of coffee, tobacco, alcohol, other medicines, etc. But also endogenous factors such as age, gender and, importantly, genetics. A drug can be administered by different routes, which will influence the speed of its effects, but in any case, it goes through a multitude of stages before reaching the tissue or organ for which it is indicated. It must be absorbed, metabolised, transported, degraded and excreted. At any of these steps, a variation in the sequence of a gene can interact with the drug and generate a different response than expected.

Thanks to pharmacogenetic DNA analysis, we can know our predisposition to various drugs.

In this way, doctors can avoid those drugs that we know are likely to cause toxicity or simply will not have the desired effect. Doctors can choose the most effective drugs according to our genetics and calculate doses much more intelligently. For years, the Netherlands has been using the genetic information of its patients, who carry this data on their health cards. The pharmacy modulates medicines based on this personalised information.

Personalised medicine, also known as individualised medicine or genomic medicine, is medicine in which doctors try to prevent, diagnose or treat a disease, depending on its stage, using a patient’s genetic or biological information. It also becomes a fundamental element for saving costs (and time) in healthcare systems because the trial-and-error system is consistently reduced. We also speak of preventive medicine, when the criterion is more the moment of evolution of the disease, in this case, before it develops. There are medicines that, once prescribed, take months to be evaluated to find out whether they have the desired effect or not. In many cases, there are different pharmacological alternatives for the same pathology, and our doctor, having our pharmacological report, will have a better chance of getting it right “the first time”.

Our Pharmacogenetic DNA Analysis is divided into 5 medical specialities: cardiology, neurology, pain, oncology and others, and analyses predispositions to dozens of drugs.

These are some of the drugs we analyse

Have you already taken a DNA test?

If you already have one of our genetic tests or a test from another company. In that case, we can use your raw data to create your 24Genetics Pharmacogenetics report, most conveniently, without sending another DNA sample. Buy it now in our shop, and in a short time, you will have your personalised report.

HOW IS THIS DNA ANALYSIS DONE?

In the following video, you have detailed the simple steps you have to follow to collect your saliva sample. Click on this instruction video. It’s really easy and from the comfort of your own home. Once you have the sample, send it back to 24Genetics. In our specialised laboratory, we will perform the sequencing, extracting the DNA from your genetic evidence. A complex computer process will then apply our unique algorithms and generate the report that we will send you.

IN WHICH COUNTRIES IS THIS TEST AVAILABLE?

24Genetics is a European company with a worldwide presence. We ship our DNA kits wherever you are in the world. EXCEPT IN THE UNITED STATES, where this test is not approved. We will send you the kit from the distribution centre closest to your place of residence for the fastest possible delivery.

DO I HAVE TO MAKE CHANGES TO MY HEALTH TREATMENTS ON MY OWN BASED ON THE CONTENT OF MY GENETIC REPORT?

The 24Genetics reports will give you information on your body’s predisposition to specific pathologies based on statistical analysis. They offer you valuable information on areas of your health to which you should probably pay special attention. But they are not diagnostic reports. Therefore, we recommend that any changes to your health that you are considering should be analysed by a genetics service or a specialised doctor.

IS EVERYTHING TO DO WITH MY DNA?

Your DNA is an essential parameter in how your body functions. But lifestyle, exercise, diet, where you live, your habits and many other circumstances also play a role. So, although it is one of the most important, your genetics is only one factor affecting your health and well-being. Our genetic reports provide you with valuable information, i.e. knowledge. Knowing yourself well will undoubtedly help you to take better care of your body and improve your well-being.

Not too many biotech companies are able to develop the complex algorithms needed to obtain reliable pharmacogenetic reports. 24Genetics tests are based on state-of-the-art genetic analysis and analyse some 720,000 genetic markers to provide you with data on your body’s propensity to respond to dozens of different drugs in the areas of cardiology—Neurology, oncology, pain and others.

WHY IS THIS PHARMACOGENETICS TEST BETTER THAN OTHERS?

Because of the amount of information we provide and the quality of it, but if you want to know all the reasons why we are convinced that 24Genetics tests are the best, you can check them out here.

WHAT ARE THE SCIENTIFIC BASES OF THIS TEST?

This test is based on countless relevant genetic studies, recognised and accepted by the international scientific community. These scientific studies are made public through prestigious institutions and scientific bodies when there is a certain level of consensus. Our genetic reports are generated by applying thousands of these studies to the genetic data of each client, using a complex algorithm developed from start to finish and periodically updated by 24Genetics.

AFTER TAKING THIS TEST, WHAT SPECIFICALLY WILL I RECEIVE?

We will send you a detailed and personalised PDF report to your e-mail address. In addition, at the time of placing your order and at any time after that, you can request your electronic raw data file with the information from your genetic map. The e-mail address where you will receive it is the one you provided when you registered your kit.

WILL 24GENETICS INFORM ME OF ANY UPDATES?

Yes, whenever we produce a new version of one of our reports, we notify all clients who have the report. In addition, you should know that we always carry out the necessary tests beforehand to ensure that the new information we include is perfectly contrasted at a scientific level.

WHO CAN TAKE THIS TEST?

Anyone, regardless of age, can take a 24Genetics test. However, if the DNA test is to be performed on a baby or an elderly person, please inform us in the comments of your order so that we can send you a special kit that facilitates the collection of the saliva sample.

IS THIS TEST VALID FOR CLINICAL USE?

This test is not valid for clinical use. However, if your doctor considers that any mutation in your report is particularly relevant, they may prescribe a second confirmatory test with diagnostic validity. Thanks to the 24Genetics pharmacogenetics test, doctors can discover important predispositions that may have been overlooked.

WHY IS PHARMACOGENETICS USEFUL?

Unfortunately, a wide variety of medications make many people unwell, and in many cases, there is an alternative drug that can work well for them. Pharmacogenetics came about to provide the information needed to understand how our genetics play a key role in our response to drugs. Of course, other factors such as age, weight and lifestyle also play a role. In addition, there may be genes not covered in the report due to scientific ignorance that are playing an important role too. However, although it is important to remember that our report is preventive and has no clinical or diagnostic validity, it does provide information on your body’s predisposition to respond to dozens of drugs. If you want to confirm the exact response to one or more specific drugs, your doctor will prescribe a pharmacogenetic test for clinical use to avoid risks.

WHAT ARE THE PARAMETERS THAT THE PHARMACOGENETICS REPORT TALKS ABOUT?

The report looks at factors such as efficacy, toxicity, metabolism and dosage.

IS THE FACT THAT MANY DRUGS APPEAR IN PURPLE A NEGATIVE?

Not necessarily. Throughout the pages of our report, you can see in what particular terms the response to each drug is described. For example, you may simply be a person who requires a lower dose of a drug.

Today there are still major uncertainties about how our DNA influences the effectiveness of drugs. Nevertheless, the drugs included in our report have passed our reliability criteria, with sufficient and extensively validated supporting scientific reports worldwide. Fortunately, the list is growing, and at 24Genetics, we are constantly working to incorporate every drug for which new genetic findings are discovered.

DOES MY GENETIC PREDISPOSITION TO DRUGS MEAN THAT MY RELATIVES RESPOND IN THE SAME WAY?

Although each person’s genetics are unique, you likely share results with people in your family. In genetics, many of the patterns that are expressed are also related to close relatives. In any case, as genetics is unique to each person, we recommend that you consult with your clinical reference service regarding the decisions to be taken, in the family setting, in terms of drugs.

Do you think pharmacogenetics can bring more value to your patients?

We have the perfect formula for you. Visit our partners and distributors websites.